While the main chapel was built in 1215, the monastery complex was founded in the 4th century by Gregory the Illuminator at the site of a sacred spring inside a cave. The monastery had thus been originally named Ayrivank (Այրիվանք), meaning "the Monastery of the Cave". The name commonly used for the monastery today, Geghard, or more fully Geghardavank (Գեղարդավանք), meaning "the Monastery of the Spear", originates from the spear which had wounded Jesus at the Crucifixion, allegedly brought to Armenia by Apostle Jude, called here Thaddeus, and stored amongst many other relics. Now it is displayed in the Echmiadzin treasury.

The spectacular towering cliffs surrounding the monastery are part of the Azat River gorge, and are included together with the monastery in the World Heritage Site listing. Some of the churches within the monastery complex are entirely dug out of the cliff rocks, others are little more than caves, while others are elaborate structures, with both architecturally complex walled sections and rooms deep inside the cliff. The combination, together with numerous engraved and free-standing khachkars is a unique sight, being one of the most frequented tourist destinations in Armenia.

Most visitors to Geghard also choose to visit the nearby the pagan Temple of Garni, located further down the Azat River. Visiting both sites in one trip is so common that they are often referred to in unison as Garni-Geghard.

The monastery was founded in the 4th century, according to tradition by Gregory the Illuminator. The site is that of a spring arising in a cave which had been sacred in pre-Christian times, hence one of the names by which it was known, Ayrivank (the Monastery of the Cave). The first monastery was destroyed by Arabs in the 9th century.

Nothing has remained of the structures of Ayrivank. According to Armenian historians of the 4th, 8th and 10th centuries the monastery comprised, apart from religious buildings, well-appointed residential and service installations. Ayrivank suffered greatly in 923 from Nasr, a vice-regent of an Arabian caliph in Armenia, who plundered its valuable property, including unique manuscripts, and burned down the magnificent structures of the monastery. Earthquakes also did it no small damage. 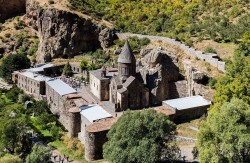