According to Georgian tradition, St. Nino, having witnessed the conversion of Georgians to the Christian faith, withdrew to the Bodbe gorge, in Kakheti, where she died c. 338-340. At the behest of King Mirian III (r. 284-361), a small monastery was built at the place where Nino was buried. The monastery gained particular prominence in the late Middle Ages. It was particularly favored by the kings of Kakheti who made choice of the monastery as the place of their coronation. Pillaged by the troops of Shah Abbas I of Persia in 1615, the Bodbe monastery was restored by King Teimuraz I of Kakheti (r. 1605-1648). With the revival of monastic life in Bodbe, a theological school was opened. The monastery also operated one of the largest depositories of religious books in Georgia and was home to several religious writers and scribes.

After the annexation of Georgia by the Russian Empire (1801), the Bodbe monastery continued to flourish under Metropolitan John Maqashvili and enjoyed the patronage of Tsar Alexander I of Russia. In 1823, the monastery was repaired and adorned with murals. Upon John’s death in 1837, the Russian Orthodox exarchate active in Georgia since 1810 abolished the convent and converted it into a parish church. In the following decades, the monastery went into disrepair, but, in the 1860s, Archimandrite Macarius (Batatashvili) began to restore the monastery and established a chanting school. The chapel housing St. Nino’s relics were refurbished by Mikhail Sabinin in the 1880s. In 1889, Bodbe was visited by Tsar Alexander III of Russia who decreed to open a nunnery there. The resurrected convent also operated a school where needlework and painting was taught.

In 1924, the Soviet government closed down the monastery and converted it into a hospital. In 1991, after the dissolution of the Soviet Union, the Bodbe monastery was resumed as a convent. Restoration works were carried out between 1990 and 2000 and resumed in 2003. 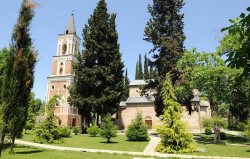