Talin's Katoghike Church sits central to the town cemetery and dominates the surrounding landscape. It is assumed to have been constructed during the late 7th century based on the architectural style. The building is currently in ruin, where the dome and a significant portion of the western wing have since collapsed. There is a dodecagonal drum that is centrally positioned over the structure. Two prayer rooms or "studies" are positioned adjacent to and at either side of the apse. Each room contains a secret passage entrance at the second story level, facing the direction of the apse. The small passage allegedly leads to small rooms above.

The apse contains the remnants of numerous portraits of the Apostles painted as frescoes around the semi-dome above. 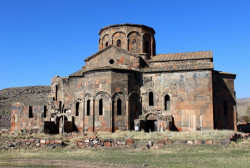