The monastery was founded by St. Dadi, a disciple of Thaddeus the Apostle who spread Christianity in Eastern Armenia during the first century AD. However, The monastery was first mentioned in the 9th century. In June, 2007, the grave of St. Dadi was discovered under the holy altar of the main church. The princes of Upper Khachen are also buried at Dadivank, under the church's gavit.

The Monastery belongs to the Artsakh Diocese of the Armenian Apostolic Church, and consists of the Cathedral church of St. Astvadzadzin, the chapel and a few other buildings. The main church has Armenian script engraved into its walls, in addition to several 13th century frescoes. The bas-relief on the south facade of the cathedral at Dadivank, built in 1214, shows the princess offering the church in memory of her sons. According to Paolo Cuneo, Dadivank is one of two Monasteries along with Gandzasarwhere bust motifs (possiblly the donors of the monasteries) can be found.

On 8 October 2001, motion 9256 was proposed (but not discussed, let alone approved) at the Parliamentary Assembly of the Council of Europe on behest of sixteen parliamentary members. According to the motion, "the local Muslim population regarded as remnants of the Armenian Christian religion and ruined the monastery as it could. 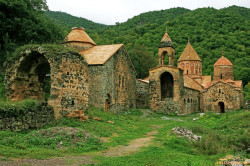