The monastery at Gandzasar was first mentioned in the tenth century. The construction of Gandzasar's Cathedral of St. John the Baptist began in 1216, under the patronage of the Armenian prince of Khachen, Hasan-Jalal Dawla, and it was completed in 1238 and consecrated on July 22, 1240.

In the 14th century, after the fall of the Armenian kingdom of Cilicia resulted in a decline in the influence of the Sis catholicosate and the re-establishment of a catholicosate at Etchmadzin, a regional catholicosate emerged in Artsakh. Gandzasar monastery became the headquarters of the Catholicosate of Aghvank, also known as the Holy See of Gandzasar. Adalian considers its foundation to be as a result of an ancient bishopric seeking "ecclesiastical autonomy to compensate for the lack of control and communication from a central pontificate" and part of various local strategies in an Armenia dominated by foreign and Islamic rule to "preserve some semblance of religious authority among the people". In the 16th century it became subordinate to the Etchmiadzin catholicosate. Many of its catholicoi were members of the Hasan-Jalal Dawla dynasty.

The complex is protected by high walls. Within the complex is the Cathedral of St. John the Baptist (Սուրբ Յովհաննու Մկրտիչ եկեղեցի in Armenian), built between 1216 and 1238. The drum of its dome has exquisite bas-reliefs that depict the Crucifixion, Adam and Eve, and two ministers holding a model of the church above their heads as an offering to God. The bas-reliefs have been compared to the elaborate carvings of Aghtamar, and some art historians consider the monastery to represent one of the masterpieces of Armenian architecture. Anatoly L. Yakobson, a prominent Soviet medieval art historian, described Gandzasar as a "pearl of architectural art....This is a unique monument of medieval architecture and monumental sculpture, which by right ought to be regarded as an encyclopedia of 13th-century Armenian art. 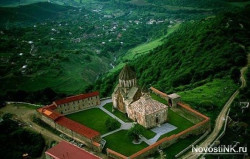