Goshavank was erected in the place of an older monastery once known as Nor Getik, which had been destroyed by an earthquake in 1188. Mkhitar Gosh, a statesman, scientist and author of numerous fables and parables as well as the first criminal code, took part in the rebuilding of the monastery.

At Goshavank, Mkhitar Gosh founded a school. One of its alumni, an Armenian scientist by the name of Kirakos Gandzaketsi wrote The History of Armenia. The architect Mkhitar the Carpenter and his disciple Hovhannes also took an active part in the building of the monastery. The complex was later renamed Goshavank and the village named Gosh in his honor. 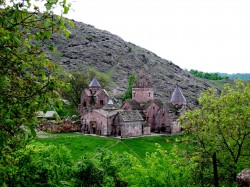