Catholicos St John the Philosopher Odznetsi (717–728) was born in Odzun, a village in the Tashirq province of the Gugarq state. At first he was educated in the parochial school of the church of the Mother of God in Odzun. Then he studied under the teacher Theodoros Qrtenavor in Aragatzotn province of Ayrarat state. He was elected his Holiness Catholicos in 717. In 719 when Caliph Omar heard of Odznetsi's holiness, he invited him to Damascus. The caliph, seeing his handsome appearance and ostentatious clothing said that Christ and the Apostles dressed much more modestly, but Odznetsi, as their follower, did not. Odznetsi asked everyone present to leave and then showed the caliph the goat-wool rags under his resplendent clothing. When Omar saw wounds on Odznetsi's body, which were the result of the ascetic lifestyle of a monk, he began to venerate Odznetsi and promised to do everything he wished for. Thanks to Odznetsi Christianity was preached freely and the lands that belonged to the martyred lords of Khram and Nakhijevan were returned to their sons. Armenia was free from taxation for 3 years and the Church never paid any taxes throughout the Arab reign. Under the Arabs, the Byzantines were banned from Armenia and for the first time since 428 the country was under the rule of one country. This was the basis of the establishment of the Armenian Bagratuni dynasty. 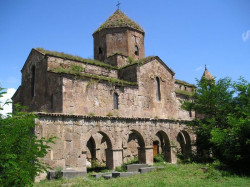