It was built along the Vardenyats Mountain Pass (previously known as the Selim Mountain Pass) in 1332, by prince Chesar Orbelian to accommodate weary travelers and their animals as they crossed from, or into, the mountainous Vayots Dzor region. Located at the southern side of Vardenyats Mountain Pass at a height of 2410 meters above sea level, Orbelian's Caravanserai is the best preserved caravanserai in the entire country. Ruins of a small chapel may still be seen adjacent to the vestibule, across the road from a spring. The only entrance to the caravanserai is at the rectangular vestibule adjacent to the main hall of the structure. It has a gabled stone shingle roof that rests on three arches. On the eastern side, these arches rest upon the edges of the windows. The southern wall of the vestibule and the entry wall façade are the few locations in the caravanserai where there is any ornamentation. The entry has decorations around the half-rounded lintel, with high-reliefs of a winged animal to the left, and a bull to the right, above the lintel. The only other decorations may be found around each of the oculi in the hall, which each have a unique design. 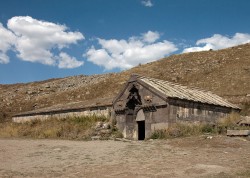