Initially the monastery was built at the southern shore of a small island. After the artificial draining of Lake Sevan, which started in the era of Joseph Stalin, the water level fell about 20 metres, and the island transformed into a peninsula. At the southern shore of this newly created peninsula, a guesthouse of the Armenian Writers' Union was built. The eastern shore is occupied by the Armenian president's summer residence, while the monastery's still active seminary moved to newly constructed buildings at the northern shore of the peninsula.

Due to easier accessibility (once it became a peninsula), good highway and railway connections with the Armenian capital Yerevan, a well-developed tourist industry in the nearby town of Sevan, and its picturesque location (although less picturesque than it was before the lake level drop), Sevanavank is one of the most visited tourism sights in Armenia. 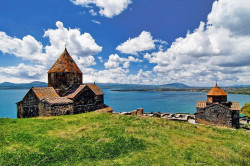