According to some sources the town of Shusha was founded in 1752 by Panah Ali Khan. Other sources suggest that Shusha served as a town and an ancient fortress in the Armenian principality of Varanda during the Middle Ages and through the 18th century. From the mid-18th century to 1822 Shusha was the capital of the Karabakh Khanate. The town became one of the cultural centers of the South Caucasus after the Russian conquest of the Caucasus region in the first half of the 19th century over Qajar Iran. Over time, it became a city and a home to many Azerbaijani intellectuals, poets, writers and especially, musicians (e.g., the ashiks, mugham singers, kobuz players).

Along with Tbilisi; it was one of the two main Armenian cities of the Transcaucasus and the center of a self-governing Armenian principality from medieval times through the 1750s. It also had religious and strategic importance to the Armenians, housing the Ghazanchetsots Cathedral, the church of Kanach Zham, two other churches, a monastic convent, and serving (along with Lachin district to the west) as a land link to Armenia. 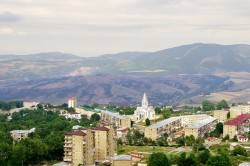