Signagi is located in the Kakheti region of Georgia, settled since the Paleolithic period. Signagi as a settlement is first recorded in the early 18th century. In 1762, King Heraclius II of Georgia sponsored the construction of the town and erected a fortress to defend the area from marauding attacks by Dagestan tribesmen.

As of the 1770 census, Signagi was settled by 100 families, chiefly craftsmen and merchants. When Georgia was annexed by Imperial Russia in 1801, Signagi (Signakh) was officially granted town status and became a centre of Signakh within Tiflis Governorate in 1802. In 1812, Signak joined the rebellion with the rest of Kakheti against the Russian rule. During the Caucasian War, the town "was considered an important point on account of its proximity to" Dagestan.

The town quickly rose in its size and population and became an agricultural center under the Soviet Union. The severe economic crisis in post-Soviet Georgia heavily affected the town, but a major reconstruction project recently launched by the Government of Georgia and co-funded by several international organizations intends to address an increasing tourist interest and modernize infrastructure. 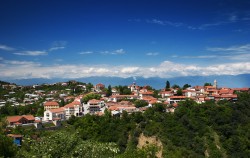