According to tradition, Stepantsminda, literally "Saint Stephan", was named so after a Georgian Orthodox monk Stephan, who constructed a hermitage at this location on what later became the Georgian Military Highway. It came under the control of a local feudal magnate, the Chopikashvili clan, who were in charge of collecting tolls on travelers in the area in the late 18th century. After the expansion of the Russian Empire into the Kingdom of Georgia in the early 19th century, the people of the region revolted against Russian rule. However, the local lord Gabriel Chopikashvili, son of Kazi-Beg, remained steadfast in his loyalty to Russia and helped to suppress the revolt. In return, he was promoted to officer in the Russian Army. He adopted the surname Kazbegi, and the village under his control was also frequently referred to as "Kazbegi". The name was officially changed to Kazbegi already under the Soviet rule in 1925. Gabriel Chopikashvili-Kazbegi's grandson was the famed Georgian writer Alexander Kazbegi, who was born in this town. In 2006, the town reverted to its original name of Stepantsminda. 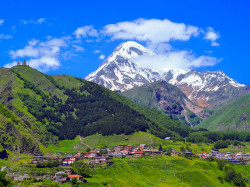