The structure was probably built by king Tiridates I in the first century AD as a temple to the sun god Mihr. After Armenia's conversion to Christianity in the early fourth century, it was converted into a royal summer house of Khosrovidukht, the sister of Tiridates III. According to some scholars it was not a temple but a tomb and thus survived the universal destruction of pagan structures. It collapsed in a 1679 earthquake. Renewed interest in the 19th century led to excavations at the site in early and mid-20th century and its eventual reconstruction between 1969 and 1975. It is one of the main tourist attractions in Armenia and the central shrine of Armenian neopaganism. 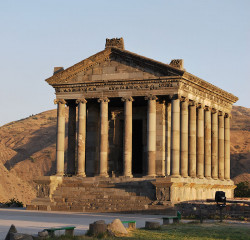