Every year on April 24—the Armenian Genocide Remembrance Day—thousands of Armenians gather at the memorial to commemorate the victims of the genocide. The people who gather in Tsiternakaberd lay fresh flowers out of respect for all the people who died in the Armenian genocide. Over the years, a wide range of politicians, artists, musician, athletes, and religious figures have visited the memorial.

The Armenian Genocide Museum-Institute (Հայոց ցեղասպանության թանգարան-ինստիտուտ Hayots tseghaspanut'yan tangaran-institut) was openedThe memorial sits on one of three hills along the Hrazdan River that carry the name Tsitsernakaberd (literally "swallow's fortress"), and was the site of what was once an Iron Age fortress. Most of the above ground traces at this peak have since disappeared, but upon the smaller hill are still traces of a castle. Archaeological surveys took place in 2007, and excavations uncovered a wall that is hundreds of meters long and may still be seen in many places above ground. An altar cut from stone sits in the middle of a square at the edge of one of the hills, and large stones that weigh approximately two tons are still visible that cover graves from the second millennium BC. Apartments were later built along the hills during Roman times, and were built over with other structures during medieval years. Nearby are also the remains of a very large building with a cave. in 1995. 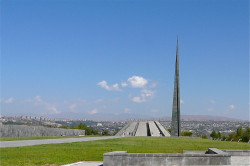