Zorats Yekeghetsi (literally, Soldier Church) sits on a hill overlooking the river. Recent excavations have uncovered a number of foundations from the early medieval times, when a monastery was established. They include well preserved walls and window casings.

A number of rough tomb stones lie on the ground in front of the church, and they are quite revealing; each bears a carefully carved eye hole at one end. The purpose for these holes is unclear, though researchers believe the stones are ancient and that they suggest this is a very old worship site, converted to Christian use at an early age. Other stones are from later periods, including several nicely carved khachkars (stone crosses).

The church was dedicated in 1303 by archbishop Stepanos- a grandson of Prince Tarsaiyich Orbelian, whose castle was in Areni. At the time, Armenia was a tributary of the Mongols (ca. 1242-1344), Armenian lords and troops requisitioned to fight against the Mamluks and renegade Turko-tribes vying for the kingdom's rich lands.

Zorats is completely unique in Armenian churches; there are no surviving structures like it in the country. Instead of a closed space with vaulted or domed ceiling, Zorats has no inner hall; the only roofed spaces are the eastern altar apse and its flanking annexes, all of which are open to a large western yard. In addition, the altar is raised more than usual, at about the height for someone to dismount from a horse, which is indeed why it was built in such a way.

The church was created so that warriors sitting on their horses could receive the sacrament and the blessing of the Church before going to battle. The blessing of troops and their horses before battle were commonplace, but no other church in Armenia was built exactly for that purpose, and with the idea of bringing both steed and soldier into the outdoor sanctuary.

Armenians famously engaged in the battle against Syria in the same year as Zorats Church was built – and also as troops were conscripted to fight the Mamluks and rival tribes as part of the Armenians’ duties as a Mongol tributary.

The church was extensively renovated in the 20th century and excavation of the surrounding area is ongoing. 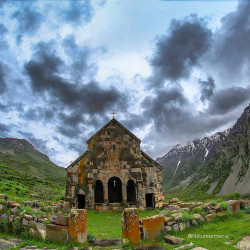